The story of Modern in the Heritage section of AD China

Read the Porro story in AD China 2020 June issue and follow the evolution of Modern, Porro’s iconic system of containers for the day area, through the words of its designer, Piero Lissoni, and the company’s president, Lorenzo Porro. It was from their aesthetic and conceptual discussion that Modern was born, generated by a square module, 40 x 40 cm. When it was born there were around 25 pieces that served as a quick and less architectonic response to systems that were much more structured and architectonic, with the idea to realize a series of finished containers and boxes to which doors and other elements could be added. Its open project has been upgraded, from the finishes to the addition of modules, to different industrial arrangements, until arriving at Modern 2020 which has little more common with the 1996 version than the name and the thickness of the modules. grid of container elements to be freely composed according to everyone's needs, Modern gives life to endless solutions for the living area, but also for the bedroom and the service spaces of the home. 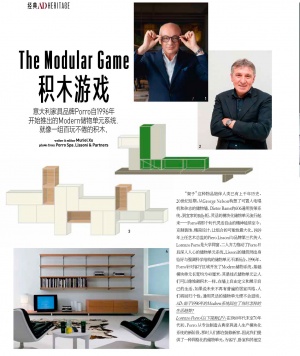